I guess I never left the “asking-why-stage”.

born in rural Flanders, I grew up (with) cycling. Not just racing road and cyclocross, but also riding to school in any conditions – probably one of the few things I never questioned. Or maybe I did, but was immediately convinced that the concept of a bicycle could hardly be improved. I can not imagine any machine more simple, efficient, practical, fun and logical.
Maybe because my godfather was a professional racer, I originally was more attracted to Mountainbike & BMX. Especially Downhill made a bridge to my passion for motorsports and I entered the pro category in ’95, riding many world cups and becoming 3-time national champion. One of my sponsors of the time was Nicolai and I started modifying his standard frames to my likes.

Studying industrial design was a natural choice, constantly questioning function and combining creativity with engineering is something I do by default. At that time, cycling industry hardly had any designers but I felt there was a great need to make bikes (visually and practically) more attractive for everyday use and to invite more people to cycling. Therefore, I did not go into sports industry but found a small company in Germany which had a similar vision; riese und muller. Apart from creating high end city bikes, I started to rework their Birdy, previously released as BD-1 in Japan. This allowed me to spend time in Japan and resulted into the monocoque design which took almost 1 year to develop, working intensively with manufacturers to solve issues typical for new technology/manufacturing.

As r-m grew, I also started working freelance for other companies such as Schwalbe & Selle san Marco & was a guest lecturer at Darmstadt University of Applied Sciences. (developing a hybrid wheelchair!) As a hobby, I did not stop riding & racing any kind of 2-wheels, from Motocross and Supermoto to the CMWC in Tokyo 2009. It was here I met my wife who was already involved in the bicycle scene; she even introduced me to long-distance riding & rinko!
In 2007, I also created stijncycles – making the frames I liked myself but were not available on the market as such. Despite the good feedback I did not start selling these bikes (yet) as I felt they were too fashionable (or just not good enough) and many others would jump onto this concept soon.

Even though my working experience grew and was very diverse, I longed to be closer to high-end manufacturing. So in 2012, we moved to Taiwan. Apart from R&D, I also offer QC; this allowed me to see many factories from inside and collect a database of especially skilled companies & craftsmen.
Being in Taiwan also allows me to spend more time in Japan. My love for Japan goes further than just traveling; I embrace its respect for old AND new, for simplicity and improvement and I am very fortunate that my wife and kids teach me about Japanese culture every day.

Currently, I spend most of my time on this small wheel bike that I made for myself. Originally because I wanted a more practical bike to travel & carry, without compromising on performance, but my interest grew the more I rode it. I already knew from my motorcycle and BMX experience that the small diameter had no (measurable) influence on performance but it seemed no one ever made a small-wheel-specific geometry. Despite Paul de Vivie (Velocio), our bicycle history is based on big wheels and even the few serious small wheel companies keep emphasizing that their bikes “ride like big ones” and mimicking their geometry.

So I decided to start over, but with small wheels as a base. Over the past 3 years, 7 Frames and 12 forks were made, each slightly different and submit to ~12000km of riding in different conditions and several kinds of riders. At this stage, I stopped modifying it – because I found a bike that rides like no other; comfortable yet stable and stiff at any speed. Even though I have a reasonable (!) collection of beautiful bikes which all gave me different input on performance and geometry, I started questioning them all: can this new bike be more than just a road or travel bike? It’s light, strong, performant but also very practical and stable when loaded – so it can be anything. Even off-road tests on rough Belgian cobbles were surprisingly comfy. This bike (I call Peg) got me passionate and excited; I did not just develop it, I discovered it as it teaches me. 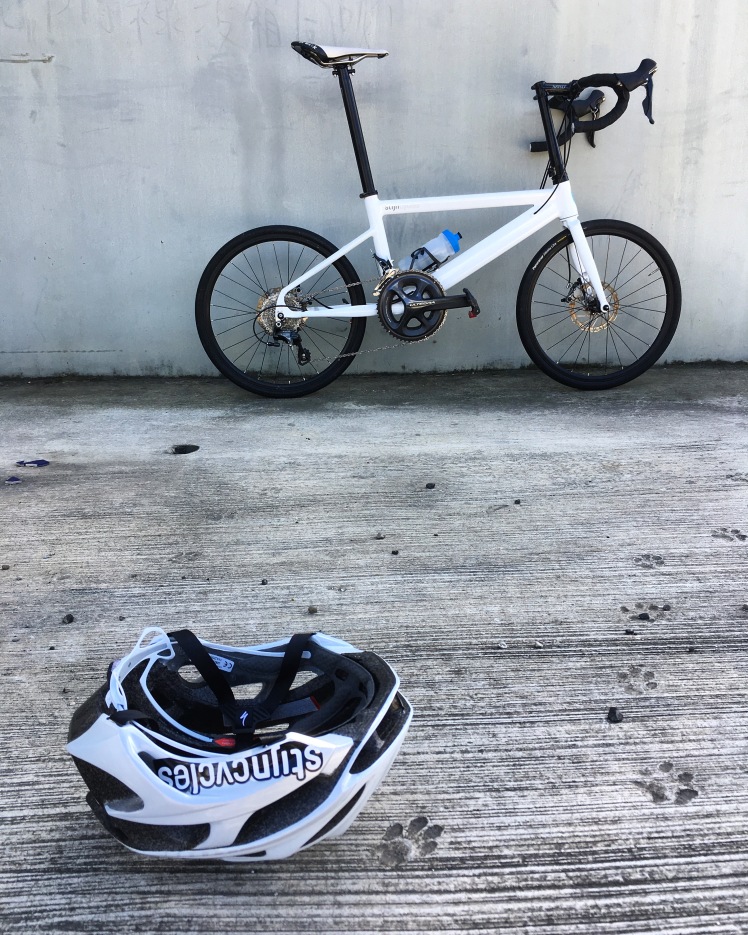